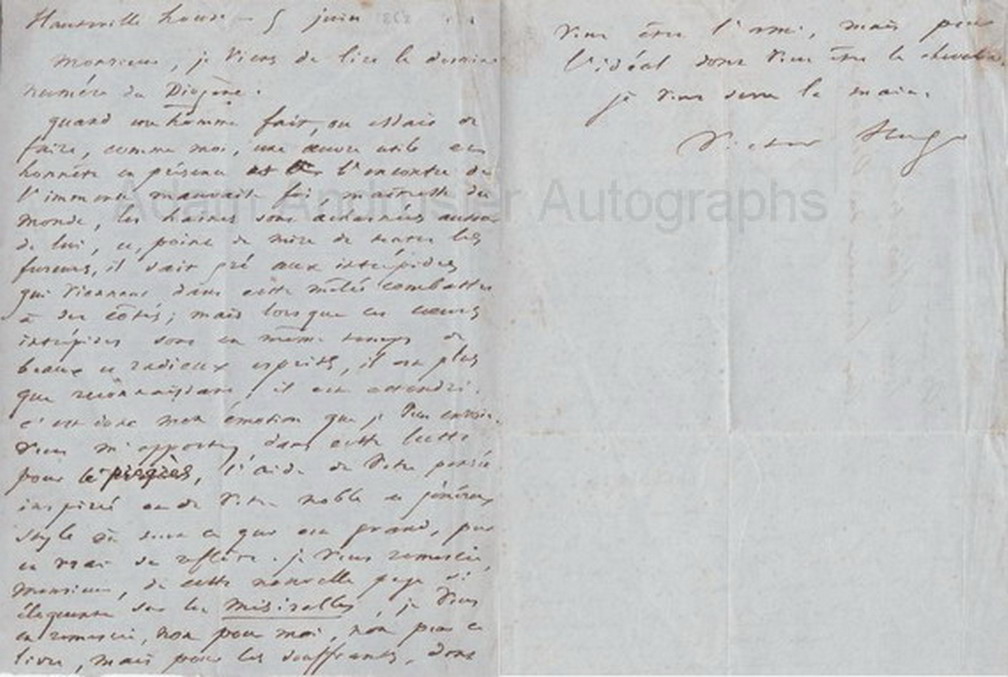 An impassioned response to a review of ‘Les Miserables’

A superb two-page autograph letter signed by Victor Hugo, June 5th (1862), a response by the author to the critic Jules Claritie’s favourable review of ‘Les Miserables’ in the journal ‘La Diogène’ of April 13th 1862; in his article, Claritie had suggested, in stark contrast to the majority of his fellow critics, that ‘Les Miserable’ was one of the greatest works ever written, and a coup de force for society’s downtrodden. Hugo responds thus, “Sir, I have just read the last issue of Diogène. When a man creates, or tries to create, as I have, a work that is useful and honest in the face of, and in opposition to, the immense evil that governs the world, when hatred pursues him and he has become the focus of all the furies, he is grateful to those intrepid souls who fight at his side; but when those brave hearts also have beautiful and radiant minds, instead of just taking casual note of it, he is softened by it. This is the emotion that I am feeling. In the struggle for progress, you have supported me with your inspired thinking and your noble and generous style, in which all that is great, pure and true is reflected. I thank you, Sir, for this new and eloquent reflection on Les Misérables. I thank you for it, not for myself, not for the book, but on behalf of those who suffer, whose friend you are, and on behalf of an ideal whose champion you have been. I shake you by the hand, Victor Hugo”. Hand-addressed by Hugo to the reverse of the letter, to Jules Claritie at the offices of ‘La Diogène’. Slight toning and a few winkles to the edges, otherwise in fine condition. An exceptional letter; letters by Hugo that relate to his most important work are of the utmost rarity.