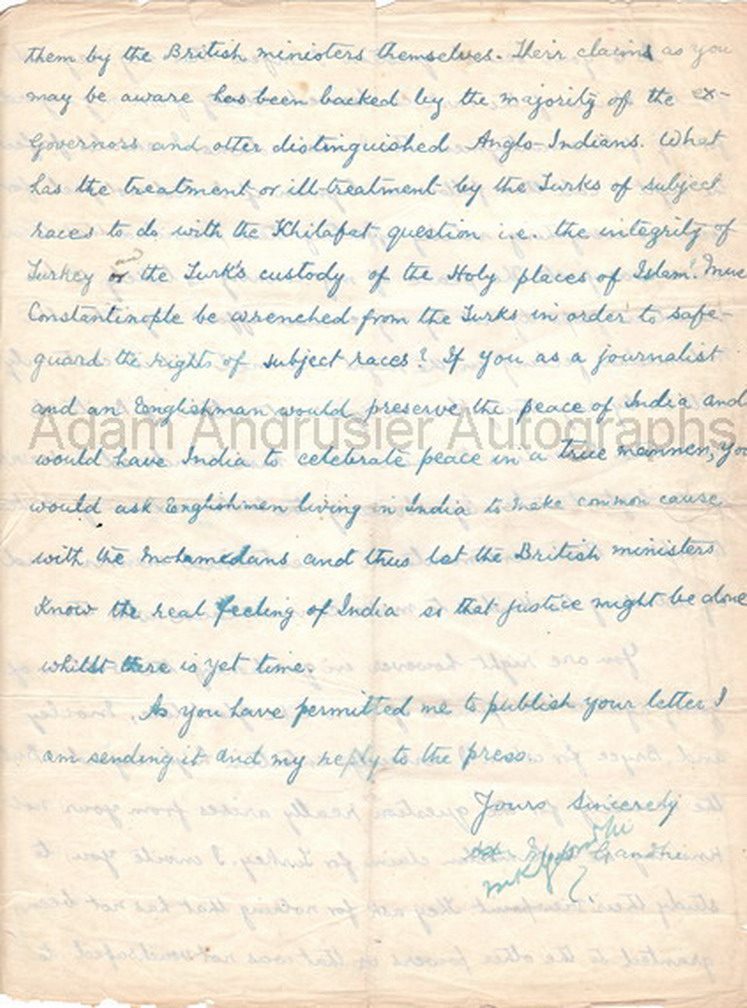 An important four-page signed letter by Mahatma Gandhi, Lahore, 15th December 1919. Written on both sides of two sheets of paper in a secretarial hand, and signed by Gandhi to the conclusion, with several autograph corrections by Gandhi throughout the letter. Addressed to the English journalist Edmund Candler, and intended for publication (it was printed in the Tribune, 18th December 1919), Gandhi sets out his position on a number of important issues, namely his attitude towards the British, the Khalifat question, his central concepts of satya (Truth), ahimsa or Satyagraha (non-violence) and the need for unity between Hindus and Muslims. In relation to his view of the British, he writes, in part, “I do not wish & have never wished to embarrass the government and I have never worked up an anti-British campaign for any cause whatsoever. My personal religion would forbid me to do either the one or the other. But sometimes one’s right conduct does embarrass those who do not for the moment appreciate it and in that sense I admit that my conduct like that of any reformer has embarrassed people. But I cannot be accused of partiality. Relentless pursuit of truth and conduct flowing from it have embarrassed the dearest ones not excluding my wife and children. But I was no more anti-the-dear ones than I am anti-British…My stubborn opposition to some acts of the British Government must not be mistaken for unfriendliness. Such peculiar notions are entertained about friendliness and loyalty in India that any strong expression of displeasure in regard to acts of Government passes for disloyalty. You will agree with me that real loyalty that dares to utter unpalatable truths must in such an atmosphere be a rare virtue.” In relation to the Khalifat issue, he writes, “my regard for the claims of the Turk is derived totally from my regard for my fellow-countrymen the Mohamedans. I should forfeit the right to call them fellow-countrymen if I did not feel for them in everything vitally affecting them provided that the cause was just. The peace of my country is likely to be placed in jeopardy not by my earnest effort to guide the Mohamedan feeling in the right channel but it certainly will be by any thoughtless or ignorant action of British ministers….But the necessity for the question really arises from your not knowing the Mohamedan claim for Turkey…They ask for nothing that has not been granted to the other powers or that was not vouchsafed to them by the British ministers themselves.Their claims as you may be aware has been backed by the majority of the ex-Governors and other distinguished Anglo-Indians. What has the treatment or ill-treatment by the Turks of subject races to do with the Khilafat question i.e. the integrity of Turkey and the Turk’s custody of the Holy places of Islam? Must Constantinople be wrenched from the Turks in order to safeguard the rights of subject races? If you…would preserve the peace of India and would have India celebrate peace in a true manner, you would ask Englishmen living in India to make common cause with the Mohamedans and thus let the British Ministers know the real feeling of India so that justice might be done whilst there is yet time”. Gandhi makes clear reference to his non-violent stance when he states, “I venture to claim that I have rendered a service of the highest order by advising the Mohamedans of India to express their sentiments in a restrained manner and by advising the Hindus to make common cause with them.” It was, of course, the failure of Hindus and Muslims to unify that led to the communal riots and wide-spread murders when India gained its independence from Britain in 1947, and the formation of the Muslim-majority state of Pakistan with mass migrations of Muslims, Hindus and Sikhs to different areas. It was a fellow Hindu, Nathuram Godse, offended by Gandhi’s work for peace and unity, who assassinated him on 30 January 1948. The year 1919/1920 was critical for both Gandhi and India’s national identity. Gandhi took a great step towards becoming a national communicator and leader through the press and Congress with a new message and new style. This marked the turning point of his nationalist commitment and participation, based on the combination of two wrongs: the treatment of the Sultan of Turkey, despite Indian Muslim sensitivity [the Khilafat question], and the incident in 1919 in the Punjab at Jallianwalla Bagh in Amritsar, and its consequences, when General Dyer ordered the shooting of unarmed civilians (400 died and thousands were injured) in a walled area from which there was no escape. In addition, the subsequent Hunter Report stirred up political and public support for Dyer in Britain. In 1919 Gandhi still had hope as a ‘staunch loyalist’; by 1920 he had become ‘an uncompromising disaffectionist and non-co-operator’. Candler later published an important article on Gandhi in 1922 in the Atlantic Monthly, in which he quotes from this letter: “sometimes one’s right conduct does embarrass those who do not for the moment appreciate it”; and “My stubborn opposition to certain [instead of some] acts of the British Government must not be taken [instead of mistaken] for unfriendliness.” Slight tears to folds, with some edge creases and tiny tears, otherwise fine. One of the most important Gandhi letters to have been offered for sale in recent years.