Why invest in autographs?

Autographs and manuscripts have proven to be excellent investments. In line with the art market, the rare autograph market has shown itself to be strikingly recession-resistant.

An original autograph document is nothing less than a piece of history, and those who have invested in autographs and manuscripts have recognised their universal appeal. They have also experienced the visceral pleasure of holding in one’s hand an important letter written by a great writer, or a revealing document signed by a world leader. In an age in which few of us still write letters, historical letters are sure to capture our imaginations further. The number of surviving documents is finite and their future supply is limited, and so it is our view that the rare autographs market is currently undervalued.

Nevertheless, it has performed and continues to outperform over the medium and long term.

To illustrate this outperformance, and with reference to the Mei Moses® index, we have put together two sample case studies: 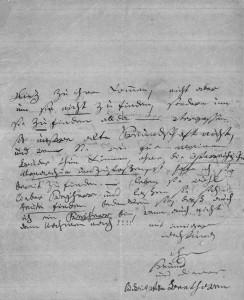 A two-page autograph letter signed by Ludwig van Beethoven, 1815, to Ludwig Freihern von Terkheim, regarding a request for a favour for his younger brother. This was sold at auction on December 5th 1997 for £18,000. It was then offered again at auction on April 20th 2011 and sold for £68,000, yielding a 10% annual return over fourteen years.

A two-page letter from Albert Einstein to Franklin D. Roosevelt, 2nd August 1939, in which he informs him about recent experiments by Fermi & Szilard, and discusses the possibility of using chain reactions in the construction of bombs. This was sold for £140,845 on December 19th 1986, then sold again for £1,187,500 March 27th 2002, yielding a 14% annual return over sixteen years.

We would direct potential investors to the websites of Sotheby’s and Christie’s, where they can reassure themselves that the cases we list above are representative of the trend in autograph prices.

We also provide ancillary/advisory services, so please get in touch if you would like auction advice and/or representation, or to employ our expertise and knowledge of the market to put together a diversified portfolio.