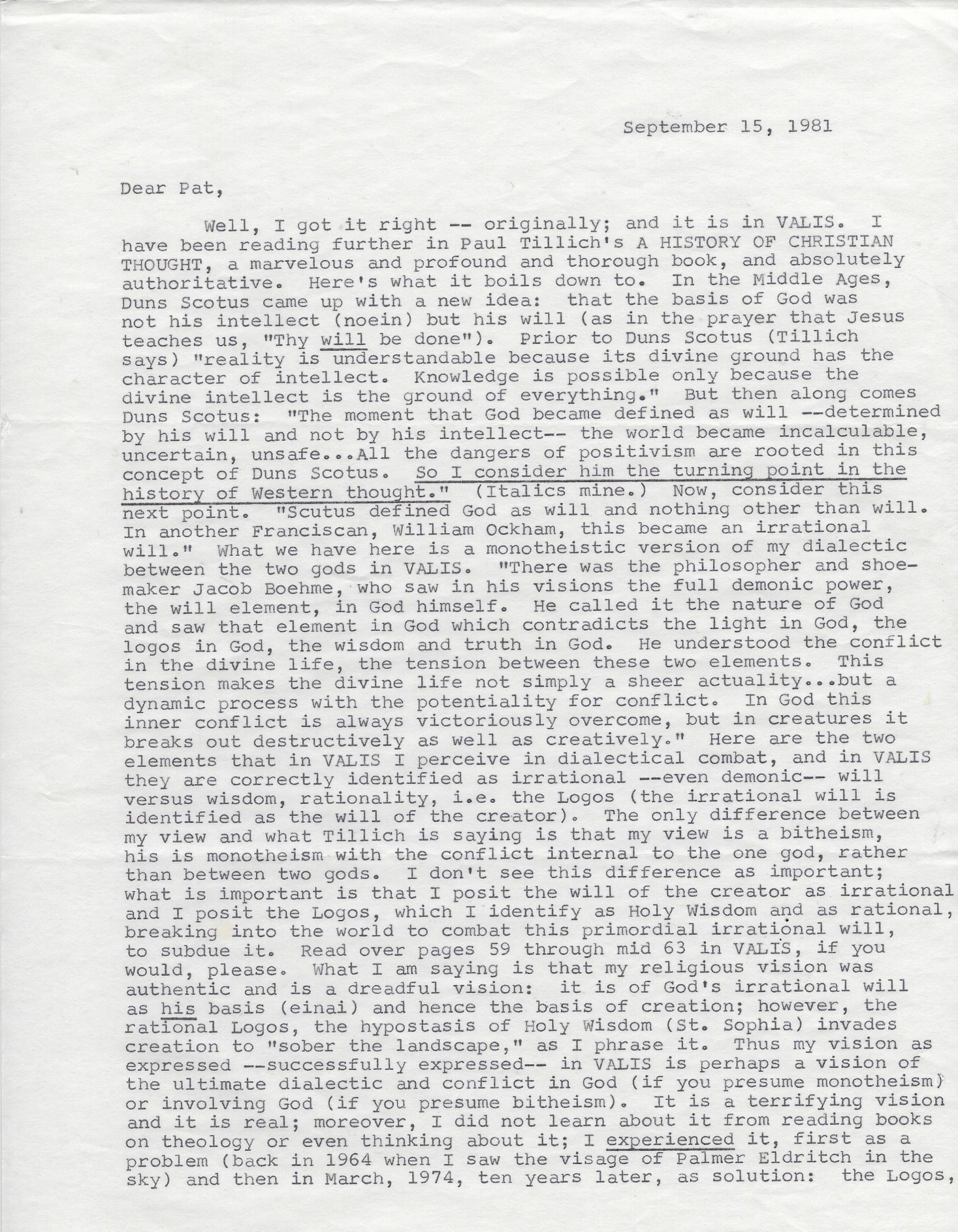 On his VALIS visions: ‘I must have seen into the very heart of God, his very einai, esse, Sein, essence; what a thing to experience!’

In part, ‘Well, I got it right—originally; and it is in VALIS. I have been reading further in Paul Tillich’s A History of Christian Thought, a marvelous and profound and thorough book, and absolutely authoritative. Here’s what it boils down to. In the Middle Ages, the Duns Scotus came up with a new idea: that the basis of God was not his intellect (noein) but his will (as in the prater that Jesus teaches us, ‘Thy will be done’). Prior to Duns Scotus (Tillich says) “reality is understandable because its divine ground has the character of intellect. Knowledge is possible only because the divine intellect is the ground of everything”. But then along comes Duns Scotus: “The moment that God became defined as will — determined by his will and not by his intellect — the world became incalculable, uncertain, unsafe… All the dangers of positivism are rooted in this concept of Duns Scotus. So I consider him the turning point in the history of Western thought.”‘

‘Now, consider this next point. “Scutus defined God as will and nothing other than will. In another Franciscan, William Ockham, this became an irrational will.” What we have here is a monotheistic version of my dialectic between two gods in VALIS. ‘There was the philosopher and shoemaker Jacob Boehme, who saw in his visions the full demonic power, the will element, in God himself. He called it the nature of God and saw that element in God which contradicts the light in God, the logos in God, the wisdom and truth in God. He understood the conflict in the divine life, the tension between these two elements. This tension makes the divine life not simply a sheer actuality…but a dynamic process with the potentiality for conflict. In God this inner conflict is always victoriously overcome, but in creatures it breaks out destructively as well as creatively.’ Here are the two elements that in VALIS I perceive in dialectical combat, and in VALIS they are correctly identified as irrational—even demonic—will versus wisdom, rationality, i.e. the Logos (the irrational will is identified as the will of the creator). The only difference between my view and what Tillich is saying is that my view is a bitheism, his is monotheism with the conflict internal to the one god, rather than between two gods. I don’t see this difference as important; what is important is that I posit the will of the creator as irrational, and I posit the Logos, which I identify as Holy Wisdom and as rational, breaking into the world to combat this primordial irrational will, to subdue it.’

‘Read over pages 59 through 63 in VALIS, if you would, please. What I am saying is that my religious vision was authentic and is a dreadful vision: it is of God’s irrational will as his basis (einai) and hence the basis of creation; however, the rational Logos, the hypostasis of Holy Wisdom (St. Sophia) invades creation to ‘sober the landscape,’ as I phrase it. Thus my vision as expressed—successfully expressed—in VALIS is perhaps a vision of the ultimate dialectic and conflict in God (if you presume monotheism) or involving God (if you presume bitheism). It is a terrifying vision and it is real; moreover, I did not learn about it from reading books on theology or even thinking about it; I experienced it, first as a problem (back in 1964 when I saw the visage of Palmer Eldritch in the sky) and then in March, 1974, ten years later, as a solution: the Logos, which is Christ or Holy Wisdom, who saves us and in fact all creation from the irrational will of God. Now, this is very scary and I am glad that finally I saw the resolution and solution, because to be exposed to the raw, irrational will of God — to perceive this as his essence— is a terrifying matter.’

‘My vision — or visions plural — was/were authentic and I managed to get it all down in VALIS; I correctly identified both sides in the vast ultimate dialectic, and which side wins (Logos) and must win (Logos)…Remember, Pat, when I had those visions, over an eleven year period, I had read absolutely nothing about this—in fact I only read it a day or so ago in Paul Tillich’s book…whereupon I reread parts of VALIS and saw that this indeed is what I experienced and depicted. This, them, was no psychosis; this was an authentic revelation, because also (and this I did not mention in VALIS) while Valis’ mind was in my mind I experienced a vast antithetical dialectic, such as Boehme describes, between a very powerful but blind side—which lost—and a very intelligent antagonist who moved second, always second, and made the last move, and won: won not by power but by wisdom. I must have seen into the very heart of God, his very einai, esse, Sein, essence; what a thing to experience! I tremble, remembering this.”

In fine condition. Accompanied by the original mailing envelope.